The Headless Boy, by Kelli Owen 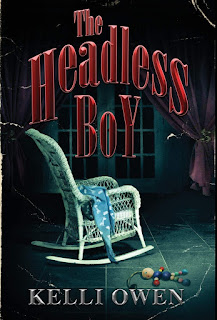 Losing a child to miscarriage is perhaps one of the most traumatic events a young married couple could possibly face. The very embodiment of their future hopes and dreams, the testament of their future lives together, gone. One can only imagine the black hole that would leave in someone's life; the division it could easily carve between partners. Especially because, inevitably, even in a loving relationship, the mother who carried the child is going to suffer much worse than her partner, if only because the life she carried within her is now gone, and that's something a partner can never understand fully, no matter how hard they try.

This is where we find Jake and Maggie at the beginning of this novel, reeling from the loss of their first and only child. Maggie is broken and mired in depression; Jake is doing his best to support her, care for her, and understand...even if he can't, fully. They eventually realize they have to leave their old lives behind, and they move to a new house out in the country, hoping to start anew.Maggie's adopted several coping strategies, and though Jake may find them amusing or even odd, he's willing to go along with just about anything, if only to see Maggie through her pain. When she starts talking to someone she calls "Bobby" (a potential name for their unborn child, named after Jake's father), Jake assumes it's just another way of her attempting to cope.It isn't, however. Something lives in this house with them. Has lived there for a very long time, and it's desperate for a mother. Before Jake quite understands what's happening, this force worms its way into Maggie's life, trying to make itself indispensable, and playing on the unspoken tensions which would inevitably exist between partners after a miscarriage. Even worse - it doesn't like Jake. Doesn't want a father figure, at all, and before long, Jake realizes it's trying to play Maggie against him, trying to convince her all she needs is "Bobby," and no one else. Certainly not Jake.Without a doubt, this is perhaps Kelli Owen's best work to date. It's restrained, populated by deftly written characters, and it creeps along quietly, insidiously, until its fast, furious, bloody end. Having read much of Owen's earliest work, it's clear that this novel shows her at the height of her game. This is an emotionally charged story which will leave you alternating between chilled, moved, and even frustrated at Maggie - how the hell could she be so blind? - and yet you get it, too. You can't blame her, at all. You know that, if perhaps you were in her shoes...you'd probably act the same.Get this now. You won't regret it. Highly recommended.