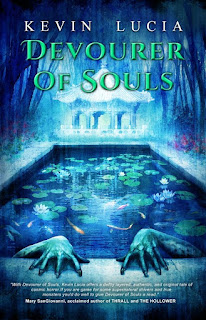 Welcome to Clifton Heights, an average Adirondack town. It's nice enough, really. Except after dark. Or on cold winter days when you're all alone...

An ancient game of chance and Fate. One boy's smoldering hate, another boy's need to make things right, and a father's ghosts of Vietnam past. These are the key players in this latest tale of revenge and reparation performed on the stage of the strange Adirondack town of Clifton Heights, NY.

The Man in Yellow

Tahawus is a small, isolated Adirondack town just north of Clifton Heights. A quiet place filled with simple people of an ardent faith, nothing much ever happens there...until the man in yellow comes calling. He knows your worst nightmares, and he can offer your fondest wish. All you need is faith...and a mouth from which to scream.

“Devourer of Souls further cements Kevin Lucia as a distinctive voice in horror and the fantastic, and it’s as good a place as any for new readers to jump in.”

"WITH DEVOURER OF SOULS, Kevin Lucia offers a deftly layered, authentic, and original tale of cosmic horror. If you are game for some supernatural shivers and true monsters, you'd do well to give Devourer of Souls a read."

Mary SanGiovanni, acclaimed author or THRALL and THE HOLLOWER “REMINDS ME OF STEPHEN KING'S NIGHT SHIFT era and other similar horror stories. Kevin Lucia shows signs of the same inventiveness and creativity as King...Lucia is a talented author and deserves more recognition among horror readers.”

"I’m reminded of Stephen King’s early work. In a genre where fictional characters are too quick to accept the supernatural, here there is doubt, a fight against the inevitable badness that’s coming. Kevin Lucia works well in the novella form, building every character as real, fleshed out people."

"Lucia sprinkles Stand by Me over a twisted mash-up of a Creature Feature version of Mr. Miyagi. The results are a lot of fun."

"Quite often, in horror especially, we find a character who acts in a bizarre way in order to meet the demands of the story. Here, these characters act how we expect them to. How we would. How anyone would. And that means feeling the consequences of choice."

"Both stories introduce antagonists which are both compelling and skin crawlingly creepy. Neither of them come across as overtly 'boo! hiss!' bad guys right away, and that works so much in each story's favour, drawing the reader in, in much the same way as the ill fated characters are drawn in to their fates."

Frank Errington - "If Stephen King and H.P. Lovecraft had a bastard child, his name would be Kevin Lucia."

Clay Sanger - "Kevin Lucia's latest offering "Devourer of Souls" expertly twists the knife of suspense, creep, and that primal fear that lives in the back of your monkey-brain with every page you turn."

Over The Effing Rainbow - "The comparison to (Stephen) King is more than passing speculation, and Kevin Lucia clearly has a knack for writing creepy atmosphere into his stories."